Blaze is subjected to the trope of “female fighting character who has their underwear exposed when they execute certain moves”:
“In all games, she wears a white thong, as seen in the animations for her jump kick.”

It’s also interesting to note that the level of this exposure was “censored” in the American version: 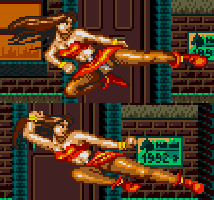 🖤🔥 In Black Room, she dances through through a smoky red field at dusk. 🔥🖤