Zero Team is a relatively obscure platformer that plays like your generic Street Fighter, ect. style fighting game. It also has an extremely common plot: a team of heroes (including one female heroine wearing a tiny thong + sheer tank top!) must rescue an (unnamed) (female) kidnapping victim.

The only playable female character, Spin, has one of the most ridiculous outfits I’ve seen: 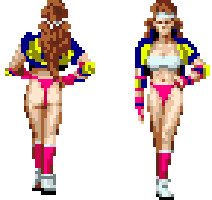 Above: Spin, front and back. 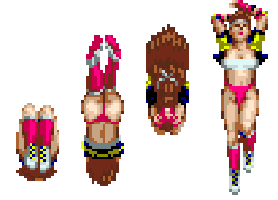 Above: Spin on a …boogie board?

Above: Spin’s (very suggestive) defeated pose. Because why not make that thong visible + prominent even when your character is unconscious? (shudder)

Above: And let’s not forget, our unnamed damsel in distress is whisked away by several men in a van.

🌹 You can see Spin’s scene in Black Room here. 🌹

🌪️ In this scene we find 🌪️